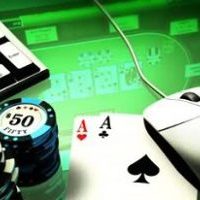 We return from the Global Gaming Expo in Las Vegas! Reporting from The Strip, gambling news includes the CEO of MGM Resorts, Bill Hornbuckle, announcing his belief that Las Vegas online casinos are “necessary” if the industry is to continue it’s growth in Nevada. There is also discussion of more record breaking gambling revenue in both Nevada and New Jersey!

Hello friends J.Todd here on the Las Vegas Strip! I just wrapped up three and a half days at the Global Gaming Expo and my feet are killing me! But hey, I got the snazzy jacket on… that’s to distract you from my face. So, it’s been effective. I got my notes here all ready to go, and I wanted to start out by saying that being in Nevada surrounded by so much casino gambling is great. But I’m gonna be on a plane tomorrow morning, and by the time you watch this show I’ll actually be back up in my home studio. And up there I can’t really gamble for real money online.

So, I got an email a few weeks ago… yes, I do read your emails, I do read your comments on the videos, and I do read your comments on Twitter, so keep them coming! This person asked me why there are no Las Vegas online casinos? Like, why is there no Bellagio online? Why is there no Bally’s online casino, from the capital of gambling: Las Vegas? And it was a great question! He asked me if I’d do a show on it actually… we have done a show on it, and I directed him to that. But online poker and online sports betting are both legal in Nevada. And there is a provision (I believe, now don’t quote me on this, but I believe) there’s a provision in that set of laws that would permit online casinos to operate in the state of Nevada, they just (for whatever reason) elected not to implement it.

Well, that may be about to change because, while the Global Gaming Expo was going on, the CEO of MGM Resorts went on record as saying Nevada and Las Vegas online casinos are are not only a good idea… but that online gambling is “necessary” for continued growth! That’s right, the CEO of MGM said online casino gambling in Nevada is necessary for continued growth! So, the big boys here… like we got Caesars and Bellagio… we got Flamingo and Harrah’s… we got Paris… we got Bally’s… you don’t see them online! At least, not in Nevada. You see a little bit of it, like, with Golden Nugget over in New Jersey… we’ll talk more about Atlantic City in the second half of the show. But to continue to grow… these casinos right here… MGM says it’s time they go online! So, take that for what it’s worth. I think it’s good news! Hopefully, you do too!

But you know, despite what the CEO of MGM said about needing to grow, Nevada gaming revenue just topped $1 billion in the month of August. And if that sounds repetitive, it’s because it is! That’s the sixth month in a row that Nevada gaming revenue has been over one$1 billion, and that’s the second longest streak in Nevada history! The longest streak is seven months, so we’re going to have to wait and see if this streak continues, and we get the numbers in.

Those numbers were from August, so we’ll wait and see what the numbers come in for September, and if they tie the record… or perhaps even keep it going beyond that! Hopefully, they do. Of course, Nevada wasn’t alone. I mentioned gambling revenue from Atlantic City in the first half of the show… and they actually are setting records as well. They are actually up over 30% year-on-year from this time in 2020. They just took in over $425 million in revenue in the month of August as well!

So, I’m getting ready to head on back up home. I’ve got some great material filmed… a lot of game reviews filmed… some interviews with the American Gaming Association specifically about the expansion of sports betting across America, and what it could mean to online gambling growth. Because when you go on your mobile phone in a state… to place a mobile sports bet… you are, in essence, gambling online. It’s just pure serendipity that I happened to do that interview right at the same time that the MGM CEO made his statements! I’d love to say I planned it that way, but I didn’t. So, thanks for watching! I’ll be back home next week, and I’ll see you then.