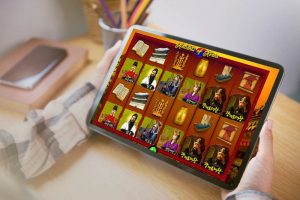 Online casino games maker and supplier iSoftBet has drawn inspiration from the Far East to craft its latest online slot – Ancients of Korea.

The game had its industrywide premiere this week to further enrich the provider’s already hefty portfolio of proprietary products.

Ancients of Korea is a 6×4 slot that, with its stunning visuals and atmospheric sounds, sweeps players into a thrilling journey through the lands of Korea. The game offers up to 4,096 winways per spin and a nice mix of features. Five ancient heroes grace the reels to represent the premiums, while symbols from this great nation’s past act as the title’s lower-paying icons.

During the bonus game, any wilds that pop into view offer multipliers of 2x or 3x. They also have another important role as some of them help players form winning combos even if they are located on non-adjacent reels.

If two or more scatters appear in a spin in the bonus game, more free spins are added to the total, offering players more opportunities to land big wins while playing iSoftBet’s newest exciting title.

Commenting on the latest addition to their games library, iSoftBet Head of Games Mark Claxton said that Ancients of Korea enables them to craft “incredibly immersive, artistic environments in an incredibly interesting part of history.”

Mr. Claxton went on to note that with its “engaging theme, huge win potential, and a giant number of free spins available” as well as its wild multipliers and high paying symbols paying out on non-adjacent reels, “players can enjoy a legendary experience.”

It should also be noted that the new game has been released shortly after iSoftBet won a Game Narrative recognition in the inaugural CasinoBeats Developer Awards.

In addition to producing new games, the studio has also been busy expanding its products’ exposure by teaming up with a growing number of major operators. Earlier this year, the company unveiled a content supply deal with William Hill and its online gaming operation.

It was also not long ago when iSoftBet’s titles went live with OlyBet in a move that expanded the provider’s presence in the Baltics as well as with BetOle, Lobbet, Winfest, Casino Days, and more. All these deals saw the games maker significantly increase its foothold across European and other markets.