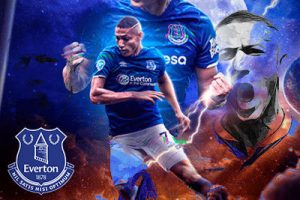 On Sunday, May 1st, 2022 Everton defeated Chelsea in the English Premier League (EPL) competition with the final tally of 1 to 0. Everton’s star forward, Richarlison de Andrade, scored the lonely goal during this match in order to propel Everton past the mighty powerhouse football club in Chelsea.

The Controversy following the Goal Scored by Richarlison

In the celebrations that quickly began after Richarlison’s goal score, a blue smoke canister that was lit was thrown on to the field by the fans spectating this football event. Richarlison retorted by abruptly picking – up the smoke canister and he proceeded to throw it off of the field, more the less it was unclear where the blue smoke bomb landed, but apparently no one was injured during this incident.

“We will look into the matter but, as far we are concerned, Richarlison was attempting to throw it out of the ground,” the spokesperson for Everton was quoted as he explained to the Great Britain Press Association.

The Goal Score by Richarlison

The one and only goal score in this soccer match came just 59 – seconds into the 2nd – half at the historic Goodison Park Stadium. Richarlison as well as Demarai Gray pressured the defender of Chelsea, Cesar Azpilicueta, in to losing possession and the Brazilian in Richarlison gathered the benefits by pushing past a sweep – shot past the goal – keeper of Chelsea, Edouard Mendy.

Richarlison has amazingly scored 4 – goals over the course of his last 5 – league games, and he has as many goals that he has scored during his first 21 – matches of this current European football season. These efforts are definitely assisting Everton’s chances to extend their 67 – year – stay in the top division of the English Premier League.

Everton is currently in 18th – place in the 2021 – 2022 English Premier League table. They are just scarcely keeping their head above water as they are barely above the EPL relegation standard right now.