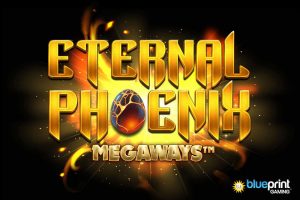 Blueprint Gaming has recently added a new Megaways title to further expand its collection of online slots that are equipped with Big Time Gaming’s iconic mechanic.

The UK-based online casino content maker this week introduced Eternal Phoenix Megaways, an exciting new title with a vibrant atmosphere and tons of special features that provide the type of thrilling experience an online slot aficionado would expect from Blueprint.

Aside from the Megaways mechanic, this new release also employs the popular Power Play mode that enables players to have more control over their Megaways experience and significantly enhances it.

Eternal Phoenix Megaways unfolds as an epic journey around fire and lava as players spin the reels of the game for a chance to play with up to 117,649 winways and win a maximum prize of 50,000x their stake courtesy of BTG’s engine and other special features.

For an additional cost, the Power Play feature guarantees a minimum number of Megaways that offer players the chance to land bigger wins, greater cascades, and a higher frequency of triggering a bonus game.

Power Play is available both during base game and in Free Spins mode, with four levels for players to choose from that control the way action develop]s. Each level sets the number of minimum Megaways on the reels up to 20,000 ways to increase the stake of up to five times the base bet.

New Game Comes with Plethora of Other Features

In addition to the Power Play mode, Eternal Phoenix Megaways also comes with several other important features that are regularly included in Blueprint’s titles, including cascading wins and mystery symbols as well as a Free Spins round that comes with a progressive multiplier.

Before the start of the Free Spins mode, players are provided with the chance to take their free spins or gamble them to potentially win additional spins all the way up to 30 of these.

Commenting on the latest addition to their already rich portfolio of games, Blueprint Gaming Director of Key Accounts and Marketing UK Jo Purvis said that it represents another example of the “premium engagement value in our games” and that the Megaways experience is “ramped up a notch” with the Power Play feature to raise the temperature for an “exhilarating gameplay.”

Ms. Purvis went on to add that the win potential is “hot as the mystical bird itself with Power Play” and that the way that this special feature offers players the chance to control the Megaways engine and how it works for them is the key to the Power Play’s popularity. She also pointed out that they are sure operators will see the difference the feature makes in the new slot’s performance.

Aside from launching new content, Blueprint has also been busy upgrading its existing products. Earlier this month, the company launched King Kong Cash Prize Lines game, the latest popular franchise that the studio has equipped with its innovative Prize Lines mechanic.