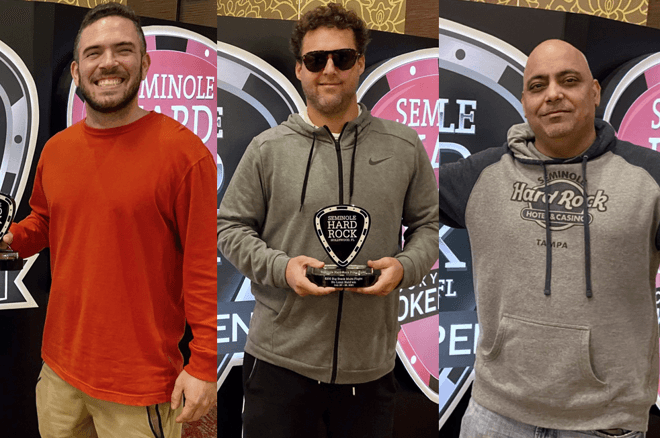 As July ends, the series has already catered to over 8,000 combined entries and has awarded in excess of $2.3 million in prize money through just 16 completed tournaments.

Here are some highlights from the first week of action.

The first trophy awarded during the series was for Event #2: $400 Limit Omaha 8 (Freezeout), a tournament that attracted 100 players and awarded a $34,000 prize pool. The tournament ended in a four-handed deal that saw the chip leader at the time, Yuval Bronshtein, claim the trophy and $6,673 in prize money.

It was a bit of déjà vu as he had won the same event via a four-way deal back in January.

“It’s pretty nice,” Bronshtein told SHRPO reporters. “I won this one in January, and right after that had two second-place finishes in mixed events. Good start to the series for sure.”

Indeed, it was a good start as just a few days later he was at it again in Event #4: $400 Deep Stack Pot-Limit Omaha, a tournament that drew 133 entries and offered up a $45,220 prize pool. Bronshtein claimed his second trophy of the series after a heads-up deal with Nancy Birnbaum.

The accomplished poker pro used his chips and experience to turn his $200 buy-in into a $51,560 payday after winning the tournament outright. The win saw him cross $4 million in lifetime tournament earnings according to The Hendon Mob.

The tournament ended in a three-way deal with Singh receiving the trophy and $6,256, It was significant as it marked his seventh Seminole Hard Rock Poker major trophy, which tied him with David Prociak for most in history,