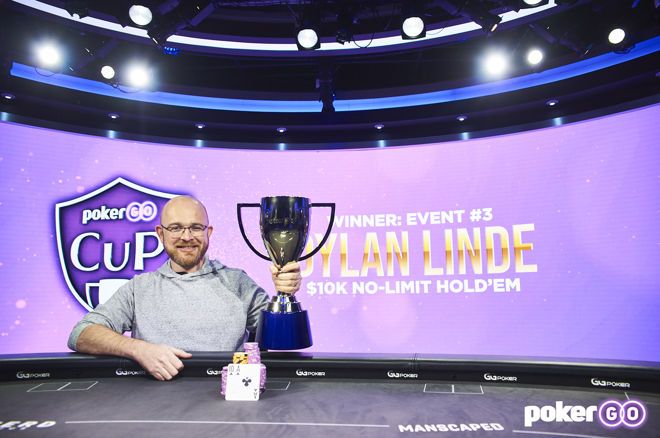 Dylan Linde catapulted to the top of the PokerGO Cup Leaderboard after coming from behind to defeat Sam Soverel in heads-up play to win the PokerGO Cup Event #3: $10,000 No-Limit Hold’em for $169,600.

It appeared that it would be Soverel’s day as he entered the final table with the chip lead and single-handedly eliminated every opponent until his run ended against Linde.

This marks the second cash for Linde this festival after previously finishing in third place in the PokerGO Cup Event #2: $10,000 NLHE for $85,400.

Although Linde has had several deep runs in big events, he has been unable to find the winner’s circle in more than 2 1/2 years when he notched his biggest career cash by winning the WPT Five Diamond World Poker Classic $10,400 Main Event for $1,631,468.

Linde credits hard work and a good network of poker friends to help him improve his game over the years.

“It’s been a huge evolution for me,” Linde said to PokerGO when asked about how his game has matured over the years. “I’ve done a lot of studying and worked with a lot of players who are a lot better than I am. I’m just lucky to be friends with some very good players that have helped me improve a lot, especially during lockdown when I just spent a lot of time studying and playing online.”

The event attracted 53 entries generating a healthy $530,000 prize pool. The final table, which took place at the PokerGO Studio at the ARIA Resort & Casino, was broadcasted to poker fans around the world at the subscription-based PokerGO.

Remember, an annual subscription to PokerGO costs $99.99, but you can save $20 off by using promo code “CUP2021” at checkout. Sign up by going here.

Soverel entered the final table with a commanding chip lead with more than double the stack of his nearest competitor in Steve Zolotow.

Fireworks erupted right away in a hand between Soverel and the short-stacked Bill Klein and Chris Brewer. Soverel min-raised with big slick before Klein jammed for six big blinds with rockets. Brewer came in for a little more than Klein with nines and Soverel called them both. Klein won the hand to effectively triple and Brewer was the first player on the rail in seventh place for $26,500 after a king spiked the board to pair up Soverel.

PokerGO founder Cary Katz was the next to go in sixth place for $31,800 on a bad beat when his aces didn’t hold against Soverel’s jacks after a jack came raining down on the river to give Soverel a set.

All Soverel Until Heads-Up Play

It was all Soverel up until heads-up play where he began with triple the stack of Linde. The winner of the heads-up battle would also become the new captain on the PokerGO Cup Leaderboard.

However, Linde battled back and eventually had double the chips of Soverel after a big hand where he jammed the river with two pair and eventually got a call by Soverel with the top pair.

Linde’s momentum continued and he had 10-times the chips of Soverel when the final hand took place. Soverel jammed with ace-three and wasn’t able to improve after Linde called with ace-ten suited to finish in second place for $111,300.

Ali Imsirovic finds himself in familiar territory after bagging the overnight chip lead with 2,350,000 in chips. The Bosnian poker sensation has done it time and time again this year with seven big victories on the PokerGO Tour including winning the title in the PokerGO Cup Event #2 for $183,000.

Where to Watch the Final Table?

The final six players will return to the PokerGo Studios on Saturday, July 10 with the action expected to begin at 3 p.m. EDT. PokerGO will live stream what promises to be some of the most exciting poker action of the year beginning at 4 p.m. EDT.

Remember, an annual subscription to PokerGO costs $99.99, but you can save $20 off by using promo code “CUP2021” at checkout. Sign up by going here.

All returning players are guaranteed at least a $45,000 payout with the eventual winner slated to take home a huge $240,000 top prize.

Linde’s reign as leaderboard captain will be a short one as Imsirovic leads the final six of the PokerGO Cup Event #4: $15,000 No-Limit Hold’em and with just six players remaining with Foxen closest on his tail. Imsirovic could get there with a fourth-place finish or better while Foxen could get be the Leaderboard captain with a third-place finish or better.

Meanwhile, it is possible that Mo Rahim, Daniel Weinand, Jordan Cristos, and David Coleman could all be the new leaderboard captain if they win the event depending on where Imsirovic and Foxen finish.

In related news, Sam Soverel continues to impress as he has cashed in the first three PokerGO Cup events before blanking the fourth event and moved up to fourth place thanks to his runner-up performance in Event #2 with Event #1 runner-up Sean Perry rounding out the top five spots on the leaderboard.

Daniel Negreanu Only Wants to Run it Once vs Sammy Farha #shorts
THE MOST CHILL BLACKJACK SESSION… BUT WE GET TO $90,000!! (Highlights)
🟣 We Gambled on Ultimate Texas Hold em in Las Vegas! With @Debbie Loves Slots #poker #slot500club ​
SUPER HARD BONUS TO GET on $40 Golden Goddess!!
I’ve NEVER seen a BONUS like this!!! JACKPOT on BCSlots Cruise!!