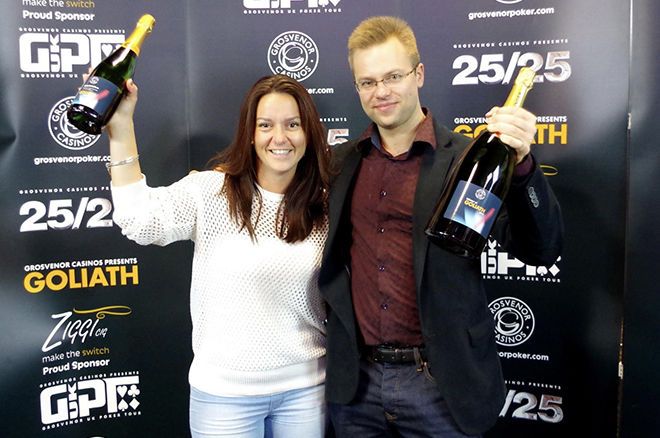 Team Grosvenor’s Katie Swift loves the GUKPT Goliath Main Event. Swift was one of a crowd of 4,210 players who bought into the 2015 edition of the tournament, helping smash the £250,000 guarantee by £171,000. Plenty of grinding later, Swift found herself heads-up against Miikka Toikka. Swift fell at the final hurdle, but the £46,300 score and going ultra-deep in such a prestigious event opened many doors for her.

Swift is well-known on the British poker circuit, but if you do not know who she is, who better to describe Swift than herself?

Are You Ready to Slay the 2021 GUKPT Goliath?

Swift’s poker journey began on Christmas Day 16-years ago. Little did she know back then that by deciding to play poker with her mum, dad, and sister, doing so with the hand rankings scribbled on a post-it note, that her life would change forever.

“As a child, my favourite games were Cluedo and Monopoly. With the perfect combination of strategy, analysis, investigation, problem solving, mathematics, confidence, control, logic, focus, mental stamina and various other skills, it felt like poker was the adult version of those two childhood games blended together, a dream game for me.”

“Without even realising it, my parents had given me the best gift that Christmas Day. Learning poker changed my life. I met my husband through poker, then swiftly took a huge gamble to give up my decade long corporate lifestyle management career to relocate to the Kent coast. We became parents to our very own Jack of our hearts (now 13 years old) and somehow found time to buy a restaurant too. I continued to play small local poker games to socialise at the weekend. Poker was an activity that I enjoyed benefits from, like trips away and meeting many new friends. Life feels like a permanent holiday and playing poker as a profession is very much central to making that possible.”

“For a game that started out as a hobby, I have managed to earn a considerable amount of money through playing poker, securing six-figure paydays both online and live. I have results, titles and trophies that I’m immensely proud of, plus experiences and memories that I absolutely treasure. Playing poker has given me the freedom to enjoy all aspects of my life and I cannot ever imagine not playing. I still feel that I’m only at the start of my poker journey and have goals that I dream of achieving in the future.”

Swift had been knocking on the door of a substantial payout for a while. Check our Swift’s Hendon Mob profile and you will see almost all of her first two dozen live tournament scores were from final table finishes.

Then came the 2015 Goliath mentioned early. Swift ultimately finished in second place which put her well and truly on the poker map, but she almost did not even play in the event at all.

“Goliath absolutely kickstarted my poker career. It was my first big live result. Typically I had kept under the radar online with the anonymity element working in my favour. However, gaining a prestigious and well respected big live result was priceless for catapulting my poker career. It felt like a huge accomplishment and by far my proudest moment in poker. Having my entire family there, meant so much as they were the ones that had originally introduced me to the game, so it was very much a shared success to celebrate. The previous week I had suffered a freak holiday accident on a water slide, cracking my cheekbone, giving me a black eye, so I actually nearly missed the event completely, which would have significantly changed the course of my life journey, which is insane to think about!”

The 2021 Goliath is right around the corner, and although Swift is disappointed, yet fully understanding, of why the event is not taking place live, she is super-excited about hitting the Grosvenor Poker virtual felt and playing in Grosvenor Poker’s biggest-ever online tournament.

“It seems every year Goliath evolves and brings something fresh to the table! It gets bigger and better every year. To soften the disappointment of it not being live, we have the excitement of it being the first-ever online multi Day 1 flights and the biggest ever online guarantee from Grosvenor Poker! I’m buzzing for it! The last three nights I have played, and won a hat trick of satellite seats for it, so I’m ready for the action next week!”

Swift says it would take a lot to top the feeling of elation she enjoyed at the 2015 Goliath, but taking down the 2021 Goliath would certainly be a contender. In fact, it would be an honour to hold the title, Swift told UK & Ireland PokerNews. Obviously, Swift is going all out to triumph in this year’s £250,000 guaranteed Goliath, but which of her fellow Team Grosvenor pros is most likely to become the tournament’s champion if they outlast Swift?

“Any of the Team Grosvenor Pros could take down Goliath Online in complete honesty, they are all class acts. It would be a tough pick as they are all playing confidently currently and running ridiculously hot too—a dangerous combination for all opponents facing battle against them!”

“I correctly had my money on the Grosvenor Sportsbook for Trigg to win GUKPT Manchester last week, so I could easily back him again. Jamie [Nixon] has multiple wins in the Grosvenor Pro Sit and Go game which is no easy task to achieve – beating the two league winners and the other three sponsored pros. He will be live-streaming the weekend of Goliath, so will have the force of the Twitch rail behind him too, which is always good for momentum. Andy [Hills] regularly crushes mid-stakes online MTTs, therefore has certainly got enough experience and expertise to secure Goliath glory. We have a cheeky little last longer between us and a loser’s forfeit to fire some spice into the mix too.”

Attracting More Female Players to the Crazy Game of Poker

Swift is an advocate for women’s poker and hosts the weekly women’s game online at Grosvenor Poker. It is password-protected, so any ladies reading this article who want to get involved need to head to the dedicated Facebook page where the password is released before each tournament.

“Grosvenor have been incredibly supportive and have added so much value to this game, with a monthly league. The top 20 leaderboard places at the end of the month share at least £500 in cash prizes. Plus the winner is invited to an exclusive Pro Sit and Go game, which is live-streamed on Twitch, where they compete against all four sponsored pros to attempt to win a tournament ticket package worth up to £1,250. Amazing added value and I’m incredibly proud of creating and hosting this game, which regularly has around 60 players every Wednesday. It’s a reasonable buy-in price of £11, is open to all UK and Ireland based females, plus there is a freeroll an hour before with three tickets being given away for entry into the 8:00 p.m. game. For members of the Facebook group, I have been doing regular give away prizes and gifts as a show of appreciation to the ladies in the poker community.”

“It’s a great opportunity to network each week, play poker in a friendly game and even enjoy new options and variants potentially. During May, I mixed it up. Each week we played a new poker variant, including NLH, Rebuy & Addon format, PKO & PLO. Many women had played these forms of poker and enjoyed the difference and being able to test them out in a safer, friendly environment. I posted a hints and tips guide for playing each format the week before so each lady was able to familiarise herself with the play. In addition, many of the females that have joined to play this women’s game each week, now also play in other games and frequently satellite into bigger events, including many that have successfully bagged Goliath seats already. So the benefits of the game and group are huge to poker.”

There were two female players at the final table of the 2020 Goliath, so Swift will not be surprised to see a lady take down this year’s monster-sized event. There are two special ladies who Swift would love to see emerge victorious if she herself does not finish in first place.

“I would love to see my mum or sister win Goliath. Both of them heads-up would be the dream conclusion!”

Goliath Is The Best Value Event on the Poker Calendar

“Goliath is, without exception, THE best value event in the annual poker calendar. The £250k guarantee is incredible, for just £110 buy-in. There are so many satellites available daily to secure a seat for cheaper too, from as little as just £1. I’ve already won a hat trick of seats all from a fiver, so can speak from experience of playing the satellites how good they are. It would be madness to miss out playing Goliath!”

“I feel privileged to be sponsored by a company that respects all levels of poker players equally. The Grosvenor management and team behind the scenes are constantly working hard, reviewing feedback, adapting and developing continually, which is brilliant for us as the players. Poker players in the UK are lucky to have the GUKPT as the best tour in England and having Goliath as part of it is wonderful. For anyone who hasn’t experienced playing it yet, I highly recommend it.”