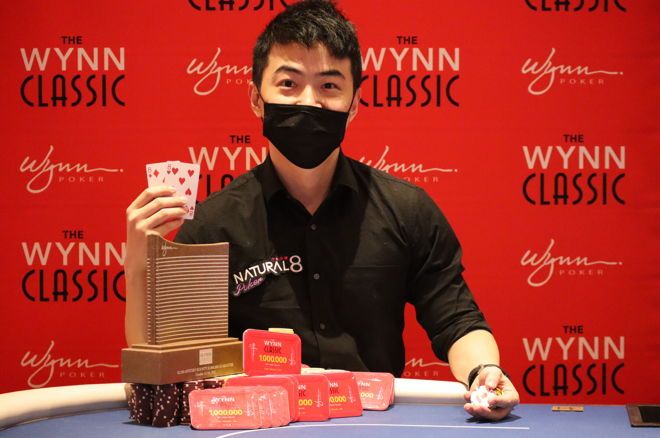 On Thursday, 255 players reconvened to play out Day 2 of the $2,200 Wynn Mystery Bounty at the Wynn Las Vegas. The event drew a total of 2,333 players across three starting flights — generating a total prize pool of $4,666,000 and smashing the $2 million guarantee.

When it was all said and done — Pete Chen emerged as the champion after making a three-way deal with Kevin Klunder and Ezequiel Waigel.

The tournament featured a special bounty format in which players would be assigned random cash-prize bounties ranging from $500 – $250,000. Chen also received eight mystery bounties during his path to victory — good for an additional $20,000.

Chen’s victory comes as an unlikely story given that he joined Day 2 late as he was busy placing 20th in a WSOP event earlier in the day.

Chen, who qualified into Day 2 of the $2,200 Wynn Mystery Bounty during the first starting flight, said he decided to prioritise competing in the WSOP to earn WSOP Player of the Year points, not surprising after receiving a boost from his earlier bracelet win in the Ultra Deepstack Online Event.

According to Chen, by the time he took his seat in the Mystery Bounty Event, he had already blinded down from 471,000 in chips down to 315,000 but was able to run good and build his stack throughout the remainder of the day.

Despite coming into the final table as chip leader, Chen found himself losing that position several times on his path to victory — particularly after losing a sizable pot to Onur Unsal early on.

Chen regained some ground after winning a race against Ray Medlin to knock him out in eighth place.

With rapidly escalating blinds, most of the eliminations came as a result of two players getting all-in preflop. Both Matthew Zarcadoolas and Onur Unsal were eliminated after finding themselves all-in with a dominated ace and failing to improve.

“I play 14 hours every day and post all my tournament receipts on Facebook. I think of poker as a hobby — not a job.”

There were a plethora of double-ups when the final table reached five-handed — with the shorter stacks always seemingly finding a way to win as the night went on.

Florian Duta eventually fell in fifth place after running into the pocket aces of Kevin Klunder and Chen would claim the last knockout of the tournament after rivering a straight to send Daniel Rezaei home in 4th place.

It didn’t take long for the final three players to discuss a deal and come to an agreement — having already played for over 14 hours since Day 2 started.

Chen, who also won his first WSOP bracelet, last week in an online event, said he intends to keep playing poker for the duration of the Wynn Fall Classic and World Series of Poker.

“I play 14 hours every day and post all my tournament receipts on Facebook,” Chen said. “I think of poker as a hobby — not a job.”

Donald Nimneh, a 43-year-old Omaha trucker driver, was able to draw the top mystery bounty prize of $250,000. You can learn more about his story in our dedicated article.

Here’s a look at who managed to snag the top mystery bounty prizes.

PokerNews will be back at the floor of the Wynn Las Vegas on October 29th again for live coverage of the $3,500 NLH Championship. Until then!