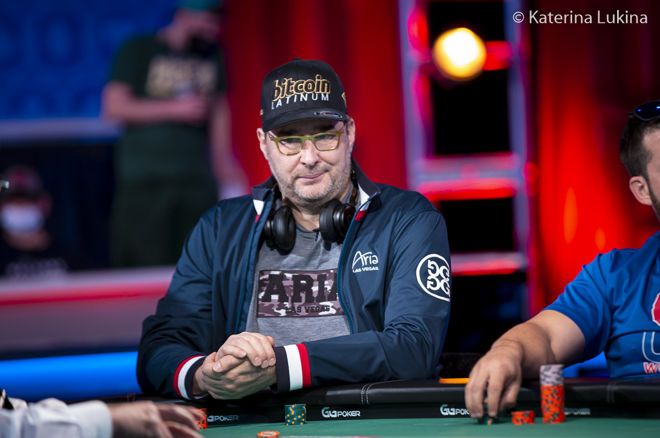 Phil Hellmuth doesn’t need to win another dollar playing poker to supplant his legacy as one of the all-time great poker players. He accomplished that goal years ago. But he still has critics, and he’s once again proving them wrong at the 2021 WSOP despite a lack of success in no-limit hold’em, the game considered by most to be his specialty.

The 15-time bracelet winner caught up with PokerNews’ Erin Webster following his final table elimination from Event #9: $10,000 Omaha Hi-Lo 8 or Better Championship. In that five-minute conversation, he gave a brutally honest answer about why he’s still playing poker regularly even though he doesn’t need the money.

“Constantly,” Hellmuth said when asked if legacy is something he thinks about. “I constantly think about legacy. What I can do, what I can’t do, I decided I want to be the greatest poker player of all time, and I decided I have to do it in World Series tournaments. I think most people are giving me the title of greatest of all time, right now. But they’re not saying I’m the best player today.”

Hellmuth continued to explain that he’s set for life financially, so the money isn’t a big deal to him. He just wants to rack up the bracelets to improve upon his legacy. As it stands, he has 15 World Series of Poker bracelets. Doyle Brunson, Phil Ivey, and Johnny Chan are tied for second with 10 a piece.

Even though he’s established a legacy as an all-time great, he’s still proving some critics wrong this year at the 2021 World Series of Poker. Many poker fans have argued in recent years that the game has passed him by, and others have said the “Poker Brat” can only dominate no-limit hold’em.

On Thursday, he busted in fifth place in Event #9: $10,000 Omaha Hi-Lo 8 or Better Championship for $80,894. That’s two final table appearances and three cashes in the first eight days of the series — all in non-hold’em events.

Related: How did Hellmuth find his competitive advantage for the WSOP?

He’s still seeking his Sweet 16th bracelet, but he’s proving wrong those who still question his greatness, all while adding to his legacy. The only thing left for him to do this fall is to win a bracelet. One would think that would completely silence the critics. But we’re talking about Phil Hellmuth here. For some reason, no matter how many times he wins, it’s never enough to some poker fans.

“I do think about legacy all the time,” Hellmuth told PokerNews. “In five or 10 years, I might not be the greatest of all time. I just have to keep winning and putting up bracelets, and it’s a good start to the 2021 series,” the Poker Brat said, who’s been drinking a daily dose of Breinfuel to keep him powered throughout the series.

He hasn’t won a bracelet yet this year, but if he continues playing at a high level like he has the first eight days of the series, especially in non-hold’em games, he just might win number 16 before long.

Earlier this summer, Hellmuth competed for an online bracelet and gave PokerNews a behind-the-scenes look at how he prepares. Check it out: