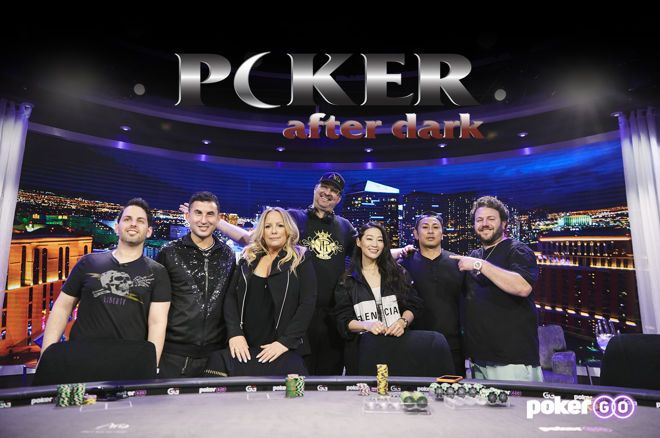 On Monday night, PokerGO aired the latest episode of “Poker After Dark” Season 13, which was Part 1 of “Action Arden.”

Below is a look at five of either the biggest or most interesting hands from this week’s episode.

Cho, an actor/singer from Amarillo, Texas who graduated from the University of Illinois (Psychology), raised to $300 with the

and Hellmuth called from the cutoff with the

. Dang came along from the small blind holding the

and it was three-way action to the flop of

As Hellmuth explained, in their home game they always run it twice, so that’s what they did in this hand. Neither the

river on the first runout helped Dang, and Cho secured half the pot.

turn on the second run gave Dang the other half of the pot with a diamond flush, and the two chopped the pot after the meaningless

was run out on the river.

and Yorn popped it to $2,200 after looking down at the

They agreed to run it twice, and the

runout on the first was good for Yorn. Cho was looking for either an ace or hearts on the second runout, but the

turn locked up the entire pot for Yorn, a Hollywood producer, and

Yerushalaim raised to $300 under the gun with the

and Hellmuth called from the cutoff with the

turn on the first run gave Hellmuth a straight, and the

river failed to pair the board. Hellmuth locked up half the $6,800 pot, while the

turn on the second runout was a brick for him. However, the

river was not as Hellmuth made his flush to scoop the pot.

Hellmuth raised to $300 from the cutoff with the

. Both blinds folded and Hellmuth responded by four-bet jamming for $4,450. Feldman called and it was off to the races for the $9,050 pot, which they opted to run twice.

flop on the first run was safe for Feldman, and so was the

river didn’t change anything and Feldman secured half the pot.

flop on the second run was also good for Feldman, and Hellmuth watched helplessly as the

bricked the turn followed by the

“Nice hand, Ryan,” Hellmuth offered before reaching into his pocket to reload for another $5,000.

“I’ve won $2 million playing poker in the last 13 months but no one has beat me like you do,” Hellmuth told Feldman.

and Levin defended the big blind with the

It was heads-up action to the

appeared on the turn.

paired the board on the river. Levin, who made aces full of sixes, paused for a few beats before moving all in for $7,475. Feldman hit the tank and seemed suspicious. Eventually, he called only to see the $26,000 pot pushed to Levin.