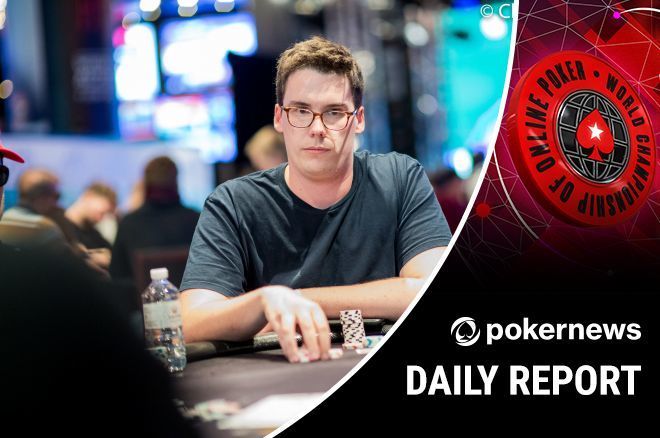 It is the final day of the 2021 World Championship Of Online Poker (WCOOP), with a host of events coming to a close. After three days of the very best online poker players battling it out, all eyes will be on the WCOOP 91-H: $5,200 NLHE Main Event Final Table as that event reaches its conclusion later to day.

Stevan “random.chu” Chew’s Day 3 performance in the $5,200 NLHE Main Event puts him in a commanding position to take the first place spoils of $1,499,942. The Indonesian poker player leads the final 9 remaining players with an emphatic chip lead; with a chip stack that is nearly the double of their closest opponent.

Australia’s Stevan “random.chu” Chew finished at the top of the pack following the action on Day 3 of the WCOOP 91-H: $5,200 NLHE [8-Max, NLHE Main Event]. Just nine players remain from the 1,965 total entries in the crown jewel event of the PokerStars online calendar.

Chew came into the day near the bottom of the leaderboard with just over three million in chips and he found a magnificent run to coast to the lead on Day 3. After an early double with pocket kings through Anthony “holdplz” Spinella, Chew bounced in and out of the top part of the leaderboard for much of the day. The Day 3 chip leader was the first and only player to cross the 100 million chip mark and he finishes at 147,396,839, good for almost double his nearest competitor “necgaidziai” with 76,129,821.

Andras “probirs” Nemeth of Hungary won his third title by taking down the WCOOP-92-H: $10,300 PLO [6-Max, PLO Main Event] for a massive $308,556 score. Nemeth entered the final table on Day 3 as chip leader and was able to get it done by defeating Denmark’s “AlexKP” during heads-up play.

A whooping 14 WCOOP champions were crowned in yesterday’s action with a hat-trick of Brazilian winners in the 8-Max, Progressive KO, Series Saver events. Brazil’s Laurie “LaliTournier” Tournier was awarded the biggest prize of the day following their victory in WCOOP 94-L: $1,050 NLHE [8-Max, Progressive KO, Series Saver], $1.25M Gtd for $182,595.

Even though 2021’s WCOOP series is winding down, there are plenty of events still ongoing. “pagan_junior” and Gabriellln join Chew as final table chip leaders in the $55 and $530 editions of the No-Limit Hold’em Main Events.

You can, of course, follow all the action from the Main Events right here at PokerNews.