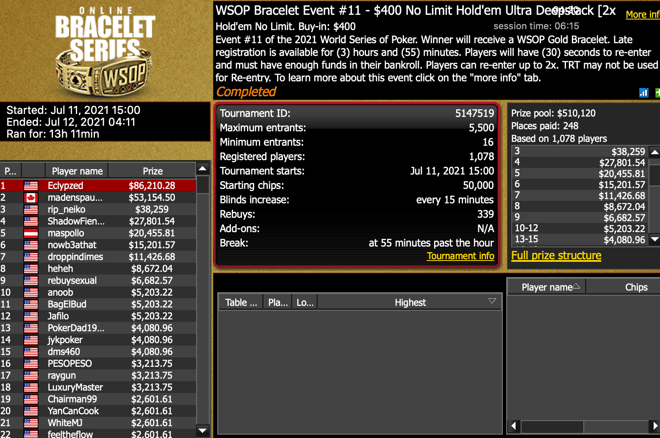 Given players started with a generous 50,000 in chips, it took 13 of play before New Jersey’s Vijay “Eclypzed” Para emerged victorious to capture the $86,210 top prize and his first gold bracelet, which will pair nicely with the gold ring he won back in March 2020 for winning the WSOP.com Super Circuit Series Event #1: $320 NLH Double Stack for $41,895.

Prior to the victory, Para had $58,004 in career WSOP-related earnings, all of which have come from playing on WSOP.com

Jesse “Rebuysexual” Cohen was the first to fall at the final despite getting it in good with ace-king against the ace-ten of Tobias “MasPollo” Anttila as a ten appeared on the flop. Not long after, two-time bracelet winner Anthony “heheh” Zinno lost his last two bigs with six-four to the ace-ten of Alexander “ShadowFiend1” Condon.

Vandeput then won a race with pocket eights against queen-nine to eliminate Anttila, and then had his pocket fours hold against the ace-three of Condon to send the latter out the door in fourth place.

Vandeput kept the momentum going by eliminating New Jersey’s Alex “rip_neiko” Rocha in third place, and that allowed him to take a more than 2:1 chip lead into heads-up play against Para.

Despite not having any final table knockouts up until that point, Para got the one that matter as he battled with Vandeput until he claimed the lead. The two jostled back and forth as the blinds got higher and higher, and eventually, Vandeput picked the wrong spot to bluff as Para called him with two pair to end the tournament.