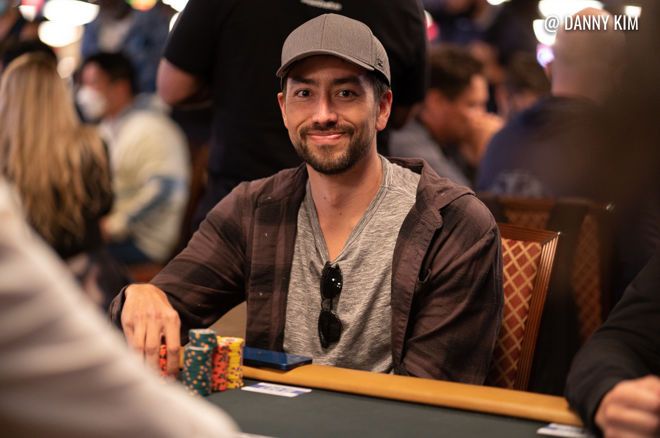 The 2021 World Series of Poker (WSOP) is only four days old yet it is producing some incredible action in Las Vegas, Nevada. October 3 saw three bracelets awarded, the $25,000 High Roller whittle its field down to only five hopefuls, and the star-studded $1,500 Dealers Choice progress to Day 2.

Connor Drinan was the first of the three bracelet winners on Day 4. Drinan was the last man standing in Event #5: $1,500 Omaha Hi-Lo 8 or Better, which earned him his second WSOP gold bracelet.

Keep reading to discover what went down in the events that are currently in-play.

Follow all the live action as it happens from the 2021 World Series of Poker in Las Vegas!

This is Tyler Cornell‘s best chance of becoming a WSOP champion. The Californian has WSOP cashes dating back to 2010, but a victory eludes him.

Cornell has not only reached the final table of the $25,000 High Roller No-Limit Hold’em event, but finds himself leading the way with only five players remaining. Cornell has 7,455,000 chips when play resumes, with Michael Liang second in chips on 5,140,000.

While Cornell has one hand on the bracelet, none of the chasing pack are going to give up without a fight. The aforementioned Liang is closest to Cornell, while the likes of Jonathan Jaffe (3,650,000), Mustapha Kanit (2,630,000), and three-time WSOP champion Adrian Mateos (2,180,000) are still in the hunt.

Each of the players is guaranteed $216,842 for their efforts so far, which pushed Cornell’s lifetime winnings through the $1 million barrier. However, $833,289 and a bracelet await the eventual champion, so nobody will want to take home the lesser amount.

Mike Takayama became the first player from the Philippines to become a WSOP champion when he won the $1,000 No-Limit Hold’em Super Turbo Bounty in 2019. Takayama bested a field of 2,065 that day, and was crowned a champion in the Rio’s Brasilia room.

Now Takayama has topped the chip counts on Day 1c of The Reunion, doing so in, you guessed it, the Brasilia room!

Another 5,871 players bought in on Day 1c, taking the total attendance to 12,975, which means the $5 million guarantee was surpassed by $449,500. Only 286 of those Day 1c starters made it through to Day 2, including Javier Fernandez, Adrian Buckley, Joseph Cheong, and Will Givens.

Day 2 of The Reunion shuffles up and deals at 10:00 a.m. local time, and sees 619 players return to their seats. Seventeen 40-minute levels are planned although the tournament will pause if the field is reduced to only five players. PokerNews will be with you every step of the way in this monster-sized tournament.

Do not miss any of The Reunion’s action

Gamble leads Host of Star in the Dealers Choice Event

Some 307 players bought in on Day 1, a number reduced to only 88 by the time the 15th level concluded. Gamble soared to the top of the chip counts courtesy of his 234,500 stack. Scores of elite poker stars will join Gamble on Day 2.

Get your mixed game fix with our $1,500 Dealers Choices updates

Day 5 of the 2021 WSOP is brimming with action. It not only has The Reunion, $25,00 High Roller, and $1,500 Dealers Choice events marching towards crowning their champion, but two new events kick-off.

As always, PokerNews is where you will find all of the updates from each 2021 WSOP event.