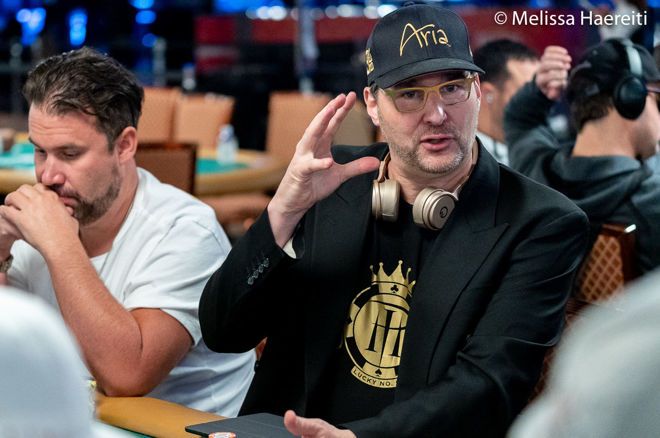 Here’s a look at some highlights of big and interesting hands caught in the PokerNews live updates.

flop was checked around and the

appeared on the turn. Action was checked to Sweeny who fired out 4,031 and Hellmuth raised all in for 9,085. Only Sweeny called and the two hands were revealed.

When the flop came down

, Marziotto check-called a bet of 1,000 and then action went check-check on the

turn, Marziotto bet 5,040 and Negreanu jammed all in for 53,620 for a big overbet. Marziotto called with the

for the nut straight. That hand help Negreanu navigate the 959-entry field to finish in 62nd place for $1,208.

Set over Two-Pair Puts Leib on the Verge

The flop came the

. There was a bet and call to swell the pot a bit more. The turn came the

It was a cooler as Leib had the

for a set over the

of Aronowitz. The river came the

and Leib was on the doorstep of a bracelet. Aronowitz gathered a couple of small doubles after to give himself a fighting chance, but he busted a short time later.

“Honestly, I was leaning on him a little bit to start the heads-up match, I believe I had him 14.5 million to 7.5 million at one point, and then the cooler hand had to happen,” Aronowitz told PokerNews. “I felt it though, I was very close to folding on the turn when he three-bet shoved on me. At that point, my mind was saying that he didn’t play this way the entire time to go out with

, etc. without actually being able to beat

. Two pair is a monster hand in a heads-up match and we were pretty deep. Me being a novice/part-time player, I rarely/never press fold there. Somebody that grinds daily,not sure they would click fold either.”

Aronowitz, a social studies teacher based in New York, continued: “I also have to add that after grinding for 12 hours staring at a computer screen, part of my brain wanted the tournament to be over right then and there. The

coming on the turn beats most of the hands he represented by raising preflop. I got a little too careless after and was really agitated and it showed. I jammed with a gutshot later on which is something I NEVER do. He played well, got lucky when it counted. This was my first heads-up match in seven years, there’s a lot I need to learn about timing and sizing.”

While he missed ut on the bracelet, Aronowitz still finished in second place for a $50,562 payday. Oh, and as for his “LuckyLuch11” screen name, Aronowitz explained it’s for his son, Luciano, along with his own former baseball number, which was 11.

Stay up-to-date with all the latest WSOP 2021 News

Finally, in a leftover hand from the Wynn Summer Classic, it was the final table of the $1,600 Mystery Bounty in Level 30 (75,000/150,000/150,000) when Victor Choupeaux raised to 350,000 from under the gun and Uri Reichenstein called from the hijack. Bryan Piccioli came along from the small blind and it was three-way action to a flop of

Piccioli checked, Choupeaux continued for 450,000, and only Reichenstein called to see the

Choupeaux bet again, this time 1.5 million, and Reichenstein paused for a bit before making the call.

completed the board on the river, Choupeaux bet 2.5 million, and Reichenstein snap-called.

bluff while Reichenstein rolled over the

for the full boat. It proved to be a game-changing hand as Choupeaux would bow out in ninth place for $22,785 while Reichenstein went on to win it for $217,948.

BLACKJACK CARD COUNTING CHALLENGE! Card Counters VS a Gambler
A Roulette Strategy You Can Play All Day + Comps
SUPER HARD BONUS TO GET on $40 Golden Goddess!!
ARE YOU RECORDING?..YA! ⫸ $50/BET BONUS!
When $25 Bets don’t work, try $50 Bets?!