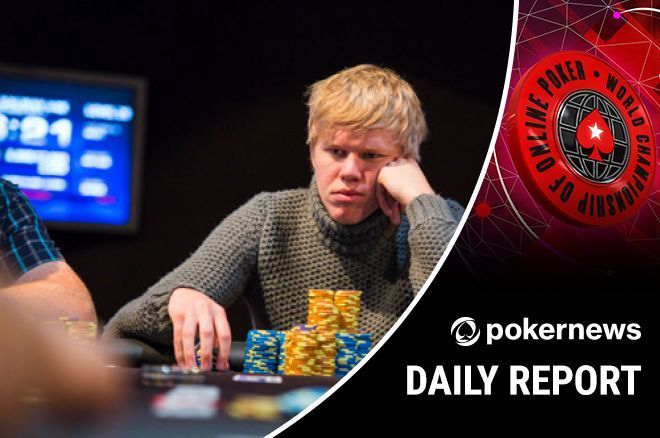 September 2 was Day 12 of the $100 million guaranteed World Championship Of Online Poker (WCOOP) and the series showed no signs of slowing down. Two massive events reached their resepctive Day 2s under the watchful eyes of the PokerNews Live Reporting team, while 15 players go into the weekend being able to call themselves a WCOOP champion.

The PokerNews live reporting team is on top of all things WCOOP. Don’t miss a beat!

Silva Leads the $2,100 Thursday Thrill But Spraggy Is In The Hunt

The action was down to just 62 hopefuls by the end of the day, each of whom advanced to Day 2 in the money with a $2,138 min-cash in their pocket along with any bounties collected along the way.

Brazil’s Eduardo “Eduardo850” Silva advanced to Day 2 as the chip leader after winning a massive pot near the end of the day. Silva is in hot form having finished Day 1 of WCOOP 49-H: $1,050 NLHE as chip leader on the same night.

However, all eyes are on PokerStars Ambassador Ben “Spraggy” Spragg who was the sole PokerStars Ambassador to advance to Day 2. Spragg returns to the action with one of the shorter stacks (796,810) but the army of fans from his Twitch channel will be hopeful their hero can turn things around.

Discover If Spraggy Can Become a WCOOP Champion Right Here

Only five players remain in contention for the next title of the PokerStars World Championship of Online Poker 2021 and Russia’s Denis “aDrENalin710” Strebkov chases an unprecedented tenth victory. Event WCOOP-52-H: $10,300 8-Game High Roller drew a field of 44 entries and came up short of meeting the $500,000 guarantee, providing additional value to the mixed game aficionados.

Once the bubble had burst with the elimination of Austrian player “donthnrmepls”, it was nine-time WCOOP winner Strebkov who led the survivors with a stack of nearly 1.5 million. He spent most of the day near the top of the leaderboard and but still has a tough battle ahead if he wishes to extend his lead on the all-time ranking of the annual flagship series on PokerStars.

Defending champion “RaulGonzalez” is close behind in second place with a stack of more than 1.3 million while Ari “BodogAri” Engel turned a max-late entry into another shot at a maiden WCOOP title. Furthermore, the five-time WCOOP champions Yuri “theNERDguy” Dzivielevski and Joao “Naza114” Vieira also made the cut as well.

The final five players will return on Saturday, September 4 at 2.15 pm EST to determine a champion. Action resumes with blinds of 6,250 / 12,500 and around seven minutes remaining in Pot-Limit Omaha. All finalists have $36,091 locked up for their efforts and the eventual winner can look forward to the title, trophy and top prize of $196,176.

Seven other WCOOP events progressed to Day 2 on September 2, and they return to the virtual felt on September 3.

2021 WCOOP Side Events Scheduled on September 3

There are no new WCOOP events taking place on September 3, but there are ten WCOOP Side Events for you to get your teeth into if you do not fancy a break from the WCOOP action!

Funny Poker Drama #shorts
⚡Lightning Link ➥ 100 WILDS on Happy Lantern #shorts
The Sickest River Card Ever 😮 #Shorts
The mathematics of gambling: how information theory changed blackjack and other games of chance
Poker comment gets OUT OF HAND 🥴 #Shorts