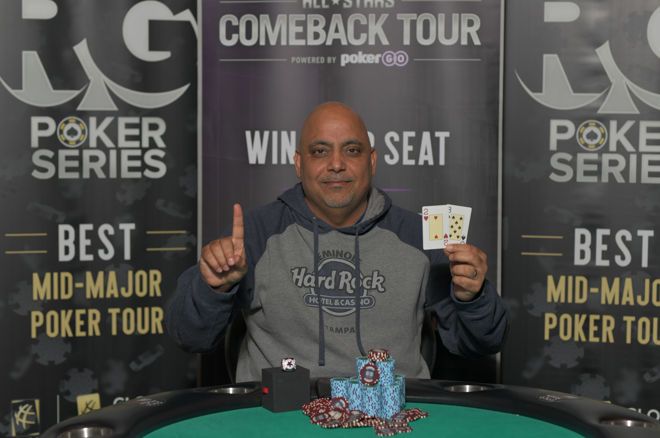 The RunGood Poker Series (RGPS) made its East Coast debut in style this week as the Seminole Coconut Creek $600 Main Event was a packed affair. Day 2 saw 74 players return from an original starting field of 519 entrants (205 on Day 1a, 314 on Day 1b), and after a twelve-hour day, it was poker pro Raminder Singh who walked away with the All Stars ring, the All Stars Pro-Am powered by PokerGO seat, and $45,456 after an even heads-up chop with fellow Florida pro Timothy “TK” Miles.

Singh, who now boasts over $1.5 million in The Hendon Mob reported earnings after the victory, said that his kids were the inspiration behind his win telling PokerNews, “My kids, they have their respective sports, they have their own medals and trophies. So whenever I win, and I go home, that actually inspires them; they want to compete harder.”

The competition would be as hot as he could handle in heads-up play, as Miles, who has over $4 million in The Hendon Mob tournament earnings, was an able competitor from the first hand of the final table to the heads-up chop.

Singh praised his opponent, saying, “TK is one of the best players here in Florida; he plays solid, and I was really looking forward to that match. We both were almost even in chips, and we decided to chop. He’s a good guy; good player.”

Singh also spoke of how much the victory meant to him overall; “This definitely ranks way high up; in (Seminole) Coconut Creek Casino, I’ve never won a big tournament here. I’ve won at Hard Rock, at Isle, even at Palm Beach Kennel Club. This is my first major tournament win at Coconut Creek, and I’m looking forward to many more!”

Heading into the final table of nine, two storylines were developing; the dominance of local pros Singh and Miles, and the opportunity for David Albertson to nab his second title of the series, after winning Event #1: $250 Super Stack No Limit Hold’em.

After Theo Lawson was eliminated in ninth, Singh went to work in making his presence felt at the final table, knocking out Brandon Schwartz, Larry Shawe, and Joseph Nolin in quick succession. Miles then stepped on the gas and dispatched Richard Leger in fifth, before a clash with Albertson saw Miles make two pair and bust Albertson, who could only manage top pair.

Mahmoud Masri then fell in third, after Miles rivered a full house against Masri’s flush. This brought the two Florida grinders in Miles and Singh heads up with near-identical stacks, and with a total of 130 big blinds remaining in play, a lengthy battle was almost assured between the duo.

Indeed, two hours would pass, with the duo grinding out the heads-up battle with a series of small pots. By the end of the third level of heads-up play, the duo was dead even in chips. Chop discussion began at that point, and after a few final small hands, Singh and Miles came to terms on a deal, and Singh earned the victory and the spoils.

That concludes our coverage of RGPS Seminole Coconut Creek. The next stop on the RGPS is at San Diego’s Jamul Casino from Sept. 7th-12. PokerNews will be back on hand for that Main Event, so be sure to tune in then!